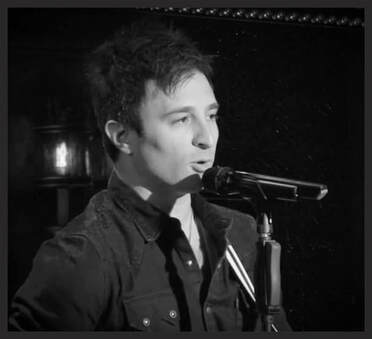 DAVID REISER (YAT Alumni 1998) is a Jewish-American writer/composer with over 15 years experience working on Broadway, Hollywood, and the West End. He is on the full-time Performing Arts faculty at Stockton University, with a focus on developing new works. He lives in New York City, was born and raised in Tallahassee, has Romaniote-Jewish family roots, and is a proud father and partner (who he was introduced to by fellow c/o 1998 YAT alum, Worth Williams -- so without YAT and Worthy... David wouldn't have a family!! How's THAT for indebted to YAT?!?).

David's original work has been produced at such renowned venues as Lincoln Center, 54 Below, Cadogan Hall, Drexel University, Feinstein's at the Nikko, Galapagos Art Space, the Brooklyn Academy of Music, and more, by such acclaimed artists as Tony Award winners and nominees Leslie Odom Jr., Nikki M. James, Gavin Creel, Keala Settle, and many more.

David was selected for the 2013 Johnny Mercer Songwriting Fellowship at Northwestern University; his work was chosen to be part of the 2016 Broadway's Future Songbook Series at the Lincoln Center Library for the Performing Arts; and he is a recipient of the 2020 Stockton University Professional Development Grant for his work on the musical film Abey Baby.

David has worked closely with groundbreaking artists to develop and direct their new works, including Matt Gould & Griffin Matthews’ The Family Project, Charly Evon Simpson’s While We Wait, and Alexander Sage Oyen & Nora Brigid Monahan’s Maximilien Robespierre Did Nothing Wrong.

David has also directed mainstage collegiate productions of Into The Woods, Avenue Q, and The 25th Annual Putnam County Spelling Bee. He is an Associate Professor of Theatre at Stockton University in Galloway, New Jersey, where he teaches classes on developing new works, lyric writing, story structure, acting, show business, and more. David's latest project at Stockton, the Creative Project Development Lab, connects Stockton students with professional writers/creators for extended residencies to develop their latest work over the course of a full semester at Stockton. See @StocktonTheatre for more info. David is also on the Musical Theatre faculty at AMDA (the American Musical and Dramatic Academy) in Manhattan, where he teaches their Senior level Mock Audition course.

As an actor, David has played featured roles on Broadway in Good Vibrations, on the National Tour of Mamma Mia!, at La Scala Opera in West Side Story, at Off-Broadway venues including Playwrights Horizons, Theatre Row, Safra Hall, and at regional houses and workshops like Casa Manaña, Weston Playhouse, and NY Stage and Film.

David additional professional work experience includes serving as a production scout for Marc Platt Productions, as a music assistant for Andrew Lippa's musical Big Fish, and as the Logic Pro instructor at The Apple Store NYC.

David received an MFA in Musical Theatre Writing from NYU Tisch School of the Arts, an MA in Music Theory from City College CUNY, and a BFA in Musical Theatre from the University of Michigan, where he is proud to have been mentored by the late, great Opera legend, Shirley Verrett. 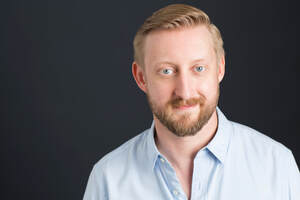 JORDAN REEVES (YAT Alumni 1998) After graduating from YAT, Jordan went on to further his studies in theatre; receive his BFA in Performance from UCF and later his MFA in Acting from Brown/Trinity Rep. Professionally, Jordan has been working as an actor, director, teacher, and writer for over two decades. Directing productions from Maine to Florida at regional theaters such as Deertrees and Weston Playhouse, and universities including UCF and Fordham in NYC. Jordan has been nominated twice in NYC for the 'Outstanding Director' Innovative Theatre Award for his productions of Pericles and The Tragedy of Arthur. In 2008, Jordan became a founding member and the Artistic Director of the Guerrilla Shakespeare Project (GSP), a non-for-profit Shakespeare company in NYC . Under his tenure, GSP was a critically acclaimed, award winning, indie theatre group that produced both classical and new works. Currently, Jordan, lives and works as a writer in London, England, where he has just finished his second novel and is excepting his first child. He is thrilled to be returning to his first theater home, YAT, to direct Joni and the Whale.

Selected Acting credits: Guerrilla Shakespeare Project (And to the Republic, Taming of the Shrew, Richard III, Measure for Measure.) Trinity Repertory Company (Cyrano, Romeo and Juliet) New American Theatre (Three Musketeers, Arsenic and Old Lace, Witness for the Prosecution, Anne) Barnstormers (And Then There Were None, Towards Zero, Things My Mother Taught Me) Deertrees Theater (LUV, Two for the Seesaw). 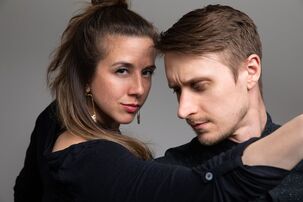 COLETTE KROGOL & MATT REEVES (YAT Alumi 2003)
Colette Krogol and Matt Reeves are directors, choreographers, filmmakers, and mixed media designers. Krogol is a Cuban-American artist who went to New World School of the Arts in Miami, Florida. Reeves is a YAT alumnus who grew up in Tallahassee, Florida. They are groundbreaking artists who bring virtuosic athleticism, mesmerizing design landscapes, and powerful imagery to their work. They have been making work collaboratively for over fifteen years as the Artistic Directors of Orange Grove Dance (OGD), a dance, design, and film company that exists at the intersection of performance and cinematic-immersive design.

​On screen, the duo has produced multiple independent dance films that have shown in cities from Munich, Germany to Boulder City, Nevada while their film The Archetypes was nominated for an ‘Arthouse Film’ award by the Stockholm Independent Film Festival and was awarded ‘Best Dance Film’ by the Et Cultura Film Festival. Their most recent film, La Tierra De Mi Madre was featured on Dance Place’s Dance on Film Series.

Krogol and Reeves have taught master classes and workshops, as well as set repertory across the United States, Europe, and China. In 2018, Krogol and Reeves were featured in the June edition of Dance Teacher Magazine in a spread titled: “Living the Dream: How one couple makes their life together in dance”. They have served as faculty at Johns Hopkins’ Peabody Institute, George Washington University, University of Florida, University of Maryland, and the Wuhan Institute of Design and Sciences. They have been Artist-In-Residence with numerous organizations, creating choreographic and cinematic works in Finland, Iceland, Italy, Spain, China, and around the US. Their international work has been supported by The Finlandia Foundation, The Jerusalem Academy of Music and Dance, RaumArs, Lönnström Taidemuseo, Museum of Zhang Zhidong, Officina Creativa, CerCCa, and Klaustrid at Skriduklaustur. 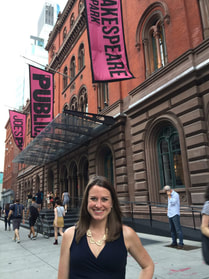 EMILY HAMMOND COOK (YAT Class of 2003) spent the last decade at one of the country's most acclaimed Off-Broadway theater organizations and one of the nation's first nonprofit theaters, The Public Theater, in New York. The Public, a producing home for some of the biggest artists in the biz as well as the brightest up and coming artists, premiered the original productions of shows such as Hair, A Chorus Line, Fun Home, and Hamilton,.  The Public is also the producing force behind the iconic Shakespeare in the Park at the Delacorte Theater in Central Park.  At The Public, Emily most recently served as the Assistant General Manager for all productions within the company's five theater spaces as well as Shakespeare in the Park.  Earlier in her tenure, Emily had the great fortune to be Company Manager for the original off-Broadway production of the mega-hit Hamilton -- an experience of a lifetime to say the least! (Ask her about the Tony night party!)

Prior to the Public, Emily worked at one of New York’s other acclaimed nonprofits, the Manhattan Theatre Club, helping produce on Broadway (Samuel J. Friedman Theatre) and Off-Broadway (New York City Center) and at HBO as part of their new series production casting team, most notably casting the pilot episodes of HBO’s Bored to Death & Hung. She holds a Bachelor of Arts in Theater Administration from the University of Georgia and was awarded UGA’s 40 under 40 award in 2015.  She graduated from the most beautiful school in T-town, Leon High (Capital Singers & Melos represent!) and is a proud YAT alum (℅ 2003)!  She is also momma to the two joys of her life -- Sydney & Riley!

Emily is thrilled to partner again with fellow YAT alum and longtime collaborator, David Reiser, who together have produced numerous developmental readings of JONI in NYC with some of Broadway's biggest stars. She is ecstatic to be returning to the pink building on Glenview Dr with her fellow alums to bring this movie musical to Tallahassee & beyond!